If you ask any infosec pro at random how they measure the severity of software vulnerabilities, chances are they’ll say that they use Common Vulnerability Scoring System (CVSS) scores. CVSS Scores are a mainstay in most vulnerability management programs as the primary metric by which one vulnerability is compared with another for purposes of prioritization.

There are three metric groups that make up every CVSS score – Base, Temporal, and Environmental. Every component has several subcomponents. 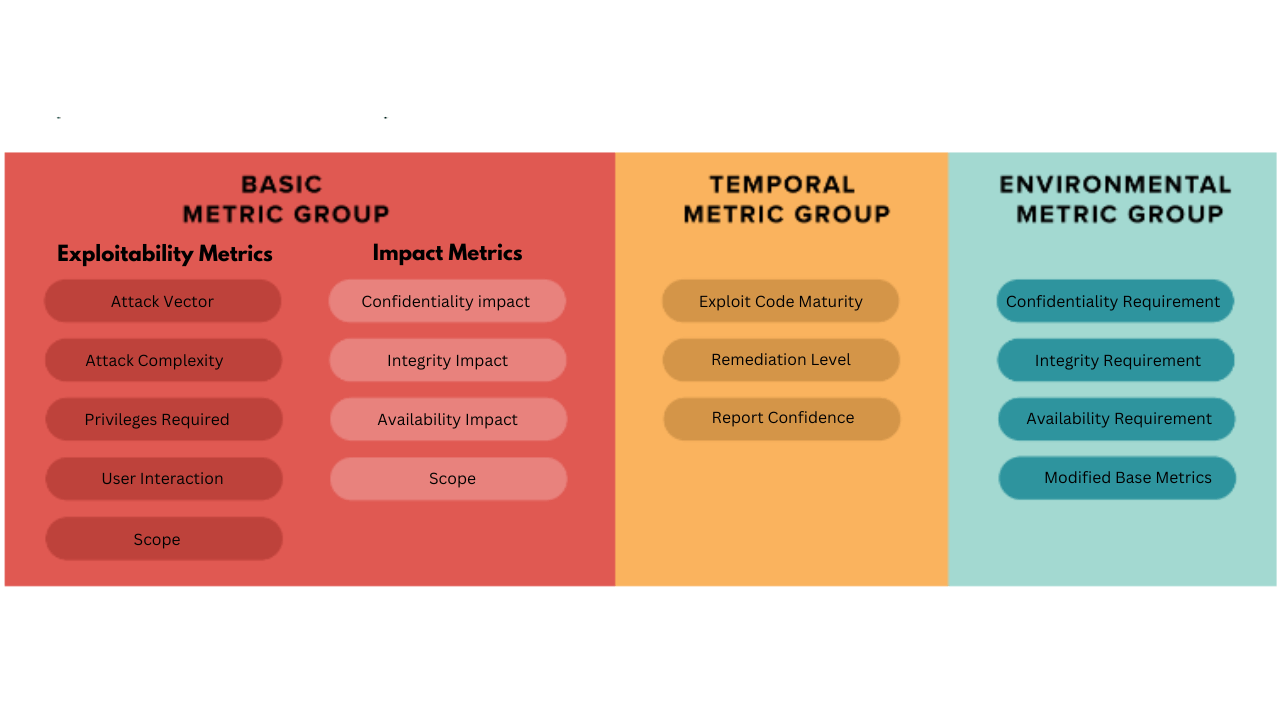 The metric group meant to show how the severity of a vulnerability changes due to specific aspects of an organization is the Environmental Metric group.

The metric group meant to show the attributes inherent in a vulnerability that do not change over time is the Base Metric group, the focus of this article.

Base Metric Group represent characteristics of the vulnerability itself. These characteristics do not change over time, and are not dependent on real world exploitability or on compensating factors that an enterprise has put into place to prohibit exploit.

No matter what an adversary, vendor, or enterprise does, the CVSS base score does not change.

CVSS Base Metrics have three sub-groupings –

Attack vector is an indicator of the level of access required for an attacker to exploit the vulnerability. A vulnerability that requires physical access to a target system is much more difficult to exploit than one that can be remotely exploited over the Internet.

The Attack Vector metric is scored in one of four levels:

This metric indicates conditions beyond the attacker’s control that must exist in order to exploit the vulnerability. Most commonly, this refers to either required user interaction, or specific configurations of the target system.

The Attack Complexity metric is scored as either Low or High:

This metric is exactly as it sounds, describing the level of privileges, or access, an attacker must have before successful exploit.

The User Interaction metric describes whether a user, other than the attacker, is required to do anything or participate in exploitation of the vulnerability.

User Interaction is a yes/no metric:

Impact Metrics measure the impact to the well known CIA Triad (Confidentiality, Integrity, Availability) of the impacted system. In other words, what is the final negative outcome that occurs as a result of exploitation.

Integrity refers to whether the protected information has been tampered with or changed in any way. If there is no way for an attacker to alter the accuracy or completeness of the information, integrity has been maintained.

Information needs to be accessible as needed. If an attack renders information unavailable, such as when a system crashes or through a DDOS attack, availability is negatively impacted.

Availability has one of three metric values:

The scope metric is a determination on whether a vulnerability in one system or component can have carry over impact on another system or component. According to FIRST, “a security authority is a mechanism (e.g., an application, an operating system, firmware, a sandbox environment) that defines and enforces access control in terms of how certain subjects/actors (e.g., human users, processes) can access certain restricted objects/resources (e.g., files, CPU, memory) in a controlled manner. All the subjects and objects under the jurisdiction of a single security authority are considered to be under one security scope. If a vulnerability in a vulnerable component can affect a component which is in a different security scope than the vulnerable component, a Scope change occurs.“

As discussed previously, published CVSS scores are typically comprised of Base Metrics only. This is a useful starting point, but really only answers the question, “Is it possible for this to do damage?”, when you really need to answer, “Can this do damage to my company?” In order to ensure that you’re not being misled by CVSS scores, you need to ensure that you’re accounting for Temporal and Environmental factors as well. This is key to successfully operationalizing CVSS scores in your vulnerability management program.

What is CVSS base score?

CVSS Scores are a mainstay in most vulnerability management programs as the primary metric by which one vulnerability is compared with another for purposes of prioritization. There are three metric groups that make up every CVSS score – Base, Temporal, and Environmental.

Base Metric Group represent characteristics of the vulnerability itself. These characteristics do not change over time, and are not dependent on real world exploitability or on compensating factors that an enterprise has put into place to prohibit exploit.

CVSS Base Metrics have three sub-groupings:

What is the difference between CVSS base score and temporal score?

CVSS scores range from 0-10, with this numeric rating being composed of three sub groups of metrics (Base, Temporal, Environmental), of which each metric group has several subcomponents.

The unchanging, static components of a vulnerability are known as CVSS Base Metrics, which are the primary metric group reported in NIST’s National Vulnerability Database (NVD), a public database of CVSS scores for known vulnerabilities.

Base Metrics do not change over time – they remain the same throughout the lifetime of a vulnerability. Temporal Metrics, on the other hand, change over time as a result of activities conducted by both software vendors and hackers.

Temporal metrics are sometimes, but not always, reported in the NVD. If the vendor of a piece of software has created a patch, and that patch is widely available, the temporal score for that vulnerability will be lower. On the other hand, if there are known exploits for a vulnerability, and those exploits are widely used and distributed, the temporal score will be higher. As the availability of patches and exploit code changes, the underlying attributes of the Temporal Metric will change, changing the temporal score and the overall CVSS score.