8 Common Cyber Attack Vectors & How to Avoid Them

If you are cybersecurity professional living in today’s shark-infested cyber-world, your mission is to stay ahead of the bad guys and keep your enterprise safe. This starts by understanding your vulnerabilities, knowing the many ways your defenses can be breached, and then putting in place the protections needed to maintain a secure, resilient cybersecurity posture. It’s a big job and critically important to the well-being of your enterprise.

Regardless of business or industry, here are three key terms that lie at the heart of every enterprise’s cyber-defenses:

The sum-total of points on a network where attacks can occur where an unauthorized user (the “attacker”) can try to manipulate or extract data using a myriad of breach methods (the “cyber attack vectors”). If you consider a graph, where the x-axis lists all of the devices and apps on your network (infrastructure, apps, endpoints, IoT, etc.) and the y-axis are the different breach methods such as weak and default passwords, reused passwords, phishing, social engineering, unpatched software, misconfigurations etc. – the plot is your attack surface.

The method or way by an adversary can breach or infiltrate an entire network/system. Attack vectors enable hackers to exploit system vulnerabilities, including the human element.

Any security incident in which sensitive, protected, or confidential data is accessed or stolen by an unauthorized party, jeopardizing an organization’s brand, customers, and assets. Incidents such as DDoS, Bitcoin mining etc. are also security breaches. Data breaches are the most common, but not all security incidents concern data theft.

So what are some of the most common types of cyber attack vectors? Read on to find out:

Stay up to date with the latest cyber security tips and news.

The username and password continue to be the most common type of access credential. Compromised credentials describe a case where user credentials, such as usernames and passwords, are exposed to unauthorized entities. This typically happens when unsuspecting users fall prey to phishing attempts and enter their login credentials on fake websites. When lost, stolen or exposed, compromised credentials can give the intruder an insider’s access. Although monitoring and analysis within the enterprise can identify suspicious activity, these credentials effectively bypass perimeter security and complicate detection. The risk posed by a compromised credential varies with the level of access it provides. Privileged access credentials, which give administrative access to devices and systems, typically pose a higher risk to the enterprise than consumer credentials. And it is not only humans who hold credentials. Servers, network devices and security tools often have passwords that enable integration and communication between devices. In the hands of an intruder, these machine-to-machine credentials can allow movement throughout the enterprise, both vertically and horizontally, giving almost unfettered access.

Weak passwords and password reuse make credential exposure a gateway for initial attacker access and propagation. Recent malware attacks such as Mirai highlight this threat not only for managed devices but also IoT connected devices.

Apps and protocols sending login credentials over your network pose a significant security threat. An attacker connected to your network can easily locate and utilize these credentials for lateral movement. For example, in the Target attack, adversaries were able to steal Active Directory credentials and propagate their attack into the enterprise payment network.

Do this to avoid it:

A malicious insider is an employee who exposes private company information and/or exploits company vulnerabilities. Malicious insiders are often unhappy employees. Users with access to sensitive data and networks can inflict extensive damage through privileged misuse and malicious intent.

Do this to avoid it:

Data encryption translates data into another form that only people with access to a secret key or password can read. Encrypted data is commonly referred to as ciphertext, while unencrypted data is called plaintext. The purpose of data encryption is to protect digital data confidentiality as it is stored on computer systems and transmitted using the internet or other computer networks. Strong encryption must be applied to data at rest, in-motion, and where suitable, in-processing.

Missing / poor encryption leads to sensitive information including credentials being transmitted either in plaintext, or using weak cryptographic ciphers or protocols. This implies that an adversary intercepting data storage, communication, or processing could get access to sensitive data using brute-force approaches to break weak encryption.

Do this to avoid this type of attack vector:

Misconfiguration is when there is an error in system configuration. For example, if setup pages are enabled or a user uses default usernames and passwords, this can lead to breaches. With setup/app server configuration not disabled, the hacker can determine hidden flaws, and this provides them with extra information. Misconfigured devices and apps present an easy entry point for an attacker to exploit.

Ransomware is a form of cyber-extortion in which users are unable to access their data until a ransom is paid. Users are shown instructions for how to pay a fee to get the decryption key. The costs can range from a few hundred dollars to thousands, payable to cybercriminals in Bitcoin.

Do this to avoid ransomware attacks:

Phishing is a cybercrime tactic in which the targets are contacted by email, telephone or text message by someone posing as a legitimate institution to lure individuals into providing sensitive data such as personally identifiable information, banking and credit card details, and passwords. It continues to be one of the most effective social engineering attack vectors. Some phishing schemes are incredibly intricate and can sometimes look completely innocent. The Office of Personnel Management (OPM) hack demonstrates how phishing can defeat almost all layers of traditional security such as email gateways and endpoint controls.

Do this to avoid phishing attacks:

Trust relationships refer to a certain level of trust that exists between users and systems. For example, trust relationships can connect two domains, so a user only has to log in once in order to access resources. The two domains in a trust relationship are the trusted domain (the domain that authenticates the user the first time), and the trusting domain (the domain that relies on the trusted domain to authenticate users and gives access to its resources without re-authenticating the user). One common breach scenario example is when credentials are cached on the trusted client, which then gets breached, wreaking havoc.

This is a relentless attack based on trial and error where the hacker attempts to determine passwords or access encrypted data. Similar to the thief who is attempting to crack a safe, the brute force attack tries numerous different combinations until one finally works. Brute force works across all attack vectors described above; including password attacks, breaking weak encryption etc., so it is not technically an attack vector on its own.

Distributed Denial of Service (DDoS) is a cyberattack against a network resource (e.g., server, website) by numerous compromised computer systems. The network resource is flooded with extraneous messages, which causes the target to slow down and/or crash, making it inaccessible to authorized users and systems. A DDoS attack normally occurs due to multiple systems being compromised. A potential mitigation method for this is to use CDNs, reverse proxies, HA proxies, etc. that put layers of defense in between systems serving content and clients requesting content.

Four exposures to keep on your radar screen

The ultimate goal of adversaries and malicious insiders is to access your high value devices, apps, and data. Left unsecured, devices and users with access to sensitive apps, data, and networks will pose a significant risk to your enterprise.

To stay ahead of the bad guys, you need to start by understanding your vulnerabilities, knowing the many ways your defenses can be breached, and then putting in place the protections needed to maintain a secure, resilient cybersecurity posture. Keeping the attack surface as small as possible should be considered a basic security measure, and is key to maintaining a strong security posture. Also managing trust relationships can help you limit or eliminate the impact or damage an attacker can inflict.

What are common attack vectors?

What are attack vectors?

What is an attack surface?

Your attack surface is represented by all of the points on your network where an adversary can attempt to gain entry to your information systems. Basically, any technique that a human can use to gain unauthorized access to your company’s data via any asset. For a medium to large sized enterprise, the attack surface can be gigantic. Hundreds of thousands of assets potentially targeted by hundreds of attack vectors can mean that your attack surface is made up of tens of millions to hundreds of billions of signals that must be monitored at all times

If you consider a graph, where the x-axis lists all of the devices and apps on your network (infrastructure, apps, endpoints, IoT, etc.) and the y-axis are the different breach methods such as weak and default passwords, reused passwords, phishing, social engineering, unpatched software, misconfigurations etc. – the plot is your attack surface. 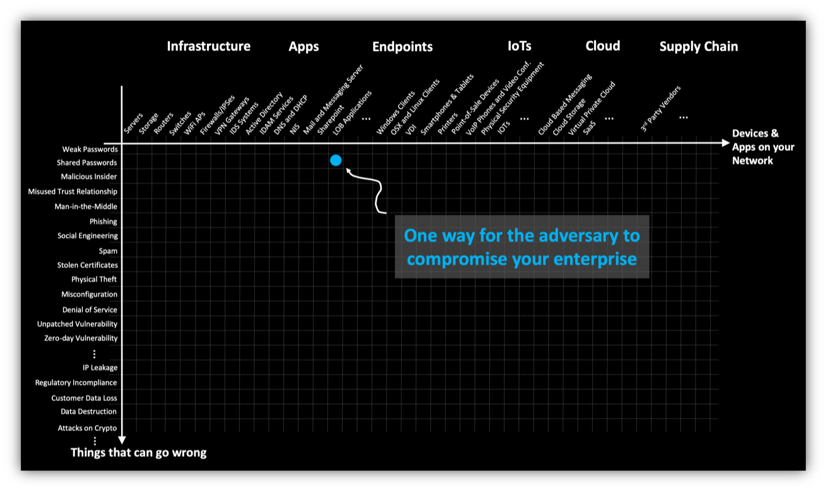