For October, Microsoft released patches for a total of 71 security vulnerabilities. Compared with this time last year, the total number of patches released is lower, but the number of zero days has increased. This month, we have 3 critical patches to contend with, and a whopping 70 marked as important. One thing to note, Microsoft doesn’t classify patches as critical by default if there is an exploit or if the patch is for a zero-day. The scoring system used takes a number of factors into account, including ease of exploitation, potential impact, etc. That said, exploits and zero days are very dangerous and need to be patched ASAP.

Other important bugs addressed this month include CVE-2021-26427 for Microsoft Exchange Server, another RCE threat. This should be patched quickly, but Microsoft was quick to explain that in order for an exploit to occur, the attacker must already be in the network.

Last, but certainly not least on the Microsoft front, yet another bug was found in the infamous Windows Print Spooler. If you recall, back in July, Microsoft was forced to release an emergency mid-month patch for what is now known as the PrintNightmare attack. This flaw (CVE-2021-36970), is a spoofing vulnerability that currently also requires direct network access, but Microsoft has still given the designation “Exploitation More Likely” to this one, and given the recent activity surrounding Print Spooler, this is one to patch ASAP.

On a non-Microsoft related note, Apple has also released some very important patches for its iOS and iPadOS operating systems. A zero-day vulnerability was discovered that could allow attackers to steal data or install malware. This vulnerability CVE-2021-30883 has been seen exploited in the wild, so be sure to update your Apple devices.

A Call to Action For You

How quickly can you resolve the exposure from this set of CVEs?

Remember you are racing against the adversaries. The industry average for mean detection time for CVEs in IT networks is 15 days and for MTTP is over 150 days. Balbix customers can detect CVEs in less than 1 hour and fix them within a day or two. As the example shown in the graph below illustrates, your likelihood of breach due to unpatched software will go up for a few hours (as new CVEs are identified) and can come down just as fast (as they are fixed). 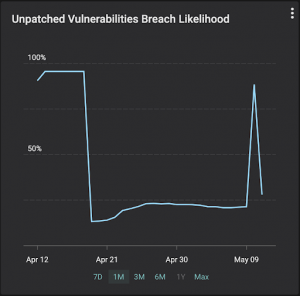 Over time, Balbix users typically achieve a decrease in mean time to patch (MTTP), as the graph below shows for a customer we onboarded earlier this year. 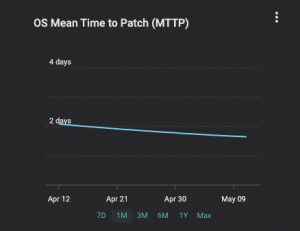